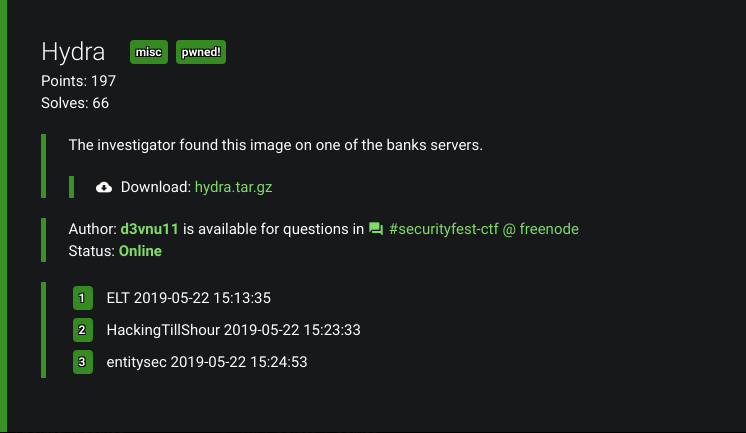 Just another chall from another CTF. A png (a big one) was given to start with. 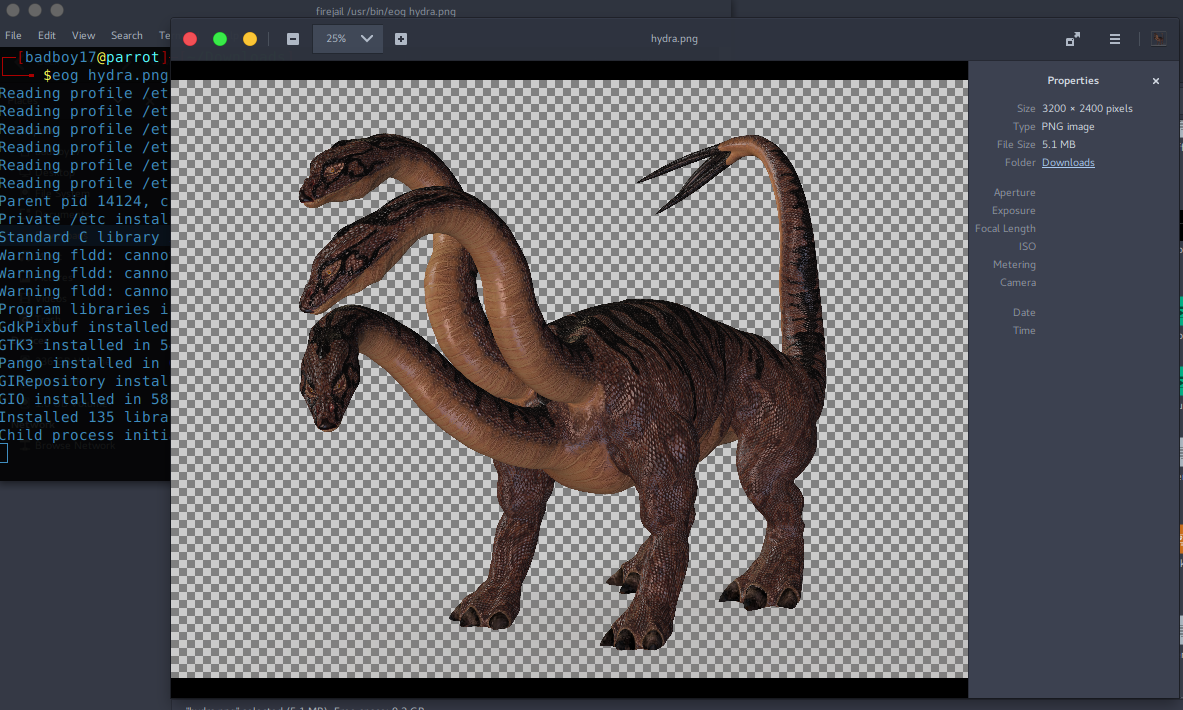 So the first hunch was to look for the embedded data. I used foremost to extract the data. Got a png and a GIF. So I started analysing the GIF first. Looked for more embedded files in the GIF.

With Binwalk I extracted the files indside the GIF. But got nothing. Then I moved to PNG which looked pretty fishy . 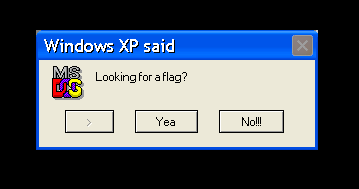 Strings had some exif data. So I used exiftool to view the metadata. And Found this rotted string. 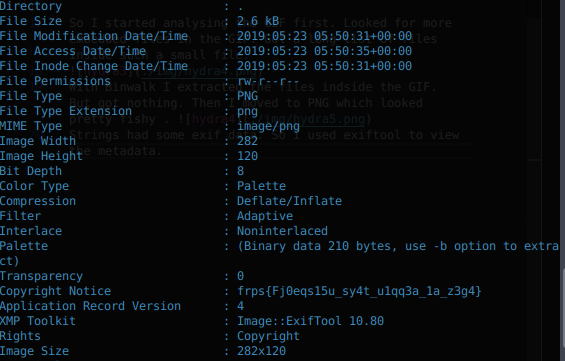 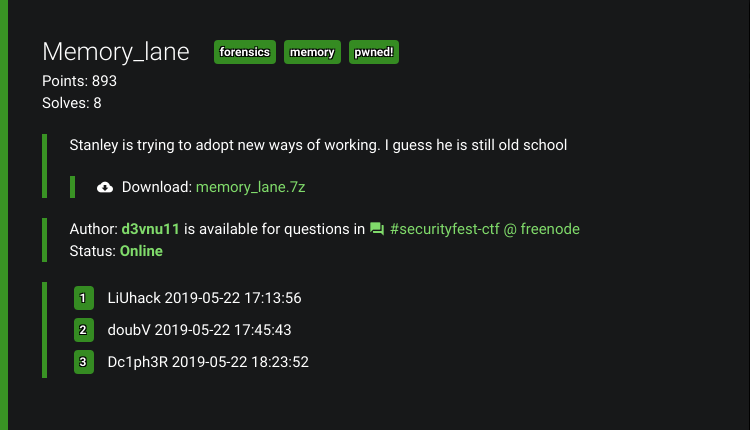 Our team Dc1ph3R made into the TOP 3 Pwners of this chall. The file took too much time to download (Slooow Internet). Extracting the 7z gave a vmem image. So a forensics chall with a image. That certainly points to Volatility but this time volatility was not able to identify the profile of the image. So I decided to use foremost and dump all the files of the image. And got a whole bunch of files.

Now I checked each and every folder for some Juicy content until I reached to png folder. It had several icons and PNGs including two QR-Codes which were same btw.

. And there it was our flag lying inside a QR-code. 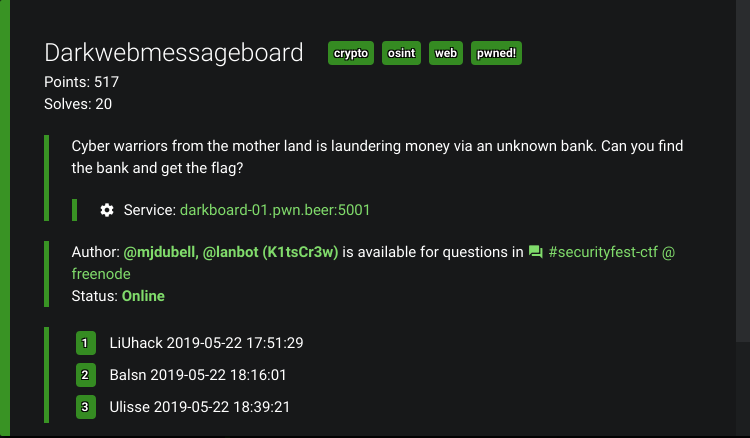 That’s a lot of categories boy.

It was pretty difficult

DISCLAIMER : This is going to be super LONG…..

This chall looked interesting because of its three different categories. So I completed the three parts one by one.

a cool one with a password form. So I viewed the source and found the string :

which was commented out. Open Source gave a hint to github. So I searched in github for the user Kits-AB and got the source for the website. https://github.com/kits-ab/the-dark-message-board. Checking the directories, robots.txt caught my eye. It had an entry /boards/*.Getting to http://darkboard-01.pwn.beer:5001/boards/1 gave us a message board which contained lot of messages. The one which was of importance was :

It was encrypted with something. Getting back to git repo, the tests dir had a test_crypto.py (this file was of super importance). Since it was OSINT the repo had 3 commits. So I looked the commit history which had this fishy commit which was deleted.

So i viewed it and it had a PRIVATE_KEY (which was to be used later) and a description:

The song in the description was Rock_You_Like_a_Hurricane , so with this I concluded that somehow rockyou.txt was involved in the chall. And this ends our OSINT phase.

Now comes the file test_crypto.py. Understanding the file, the script carries out random generation of private keys on top of a password and a PADDING… (Boy oh Boy that much Security).So this was the script in a nutshell, with this we needed to find a password from rockyou.txt to decrypt the text obtained from /boards/1 . So i modified the test_crypto.py to accomplish this. Here’s my modified decryption function.

I looped thorugh all the pwds from rockyou to get a hit and replaced the PRIVATE_KEY with the one given in github deleted commit and waited for the decrypted text to appear. The heavy load nearly crashed my box. The decrypted text was a URL for our next phase.

This marked the end for our Crypto Phase.

Now the last and the longest phase. Opening the URL obtained got me nowhere. So the chall desription had this :

So our modified URL changed to http://bankofsweden-01.pwn.beer:5000

It directed us to the BANK website which the chall had in its description. It had a Login and Registration form. I registered with some creds but for some reason the account did’nt seem to activate. So while registering, I captured the request with Burp-Suite. It had an is_active param. Setting it to true did the trick to activate our account.

Exploring the site, it had two features IMPORT and EXPORT. I first used the export feature

When I clicked the export btn It tried to open a file which wasn’t present in the dir. So It was a bit suspicious. So I called my frnd BURP again and captured the req. Param account had LFI.

Hahah I got /etc/passwd. Now the real part came. looking for the flag….. It took some time to find the dir and the flag file. Using /proc/self/environ I looked through the env variables and found this:

This was the last lead which I found and it took me a while to figure out that the webapp was FLASKED…(based on flask). So I looked tried tha app.py inside ctf/ 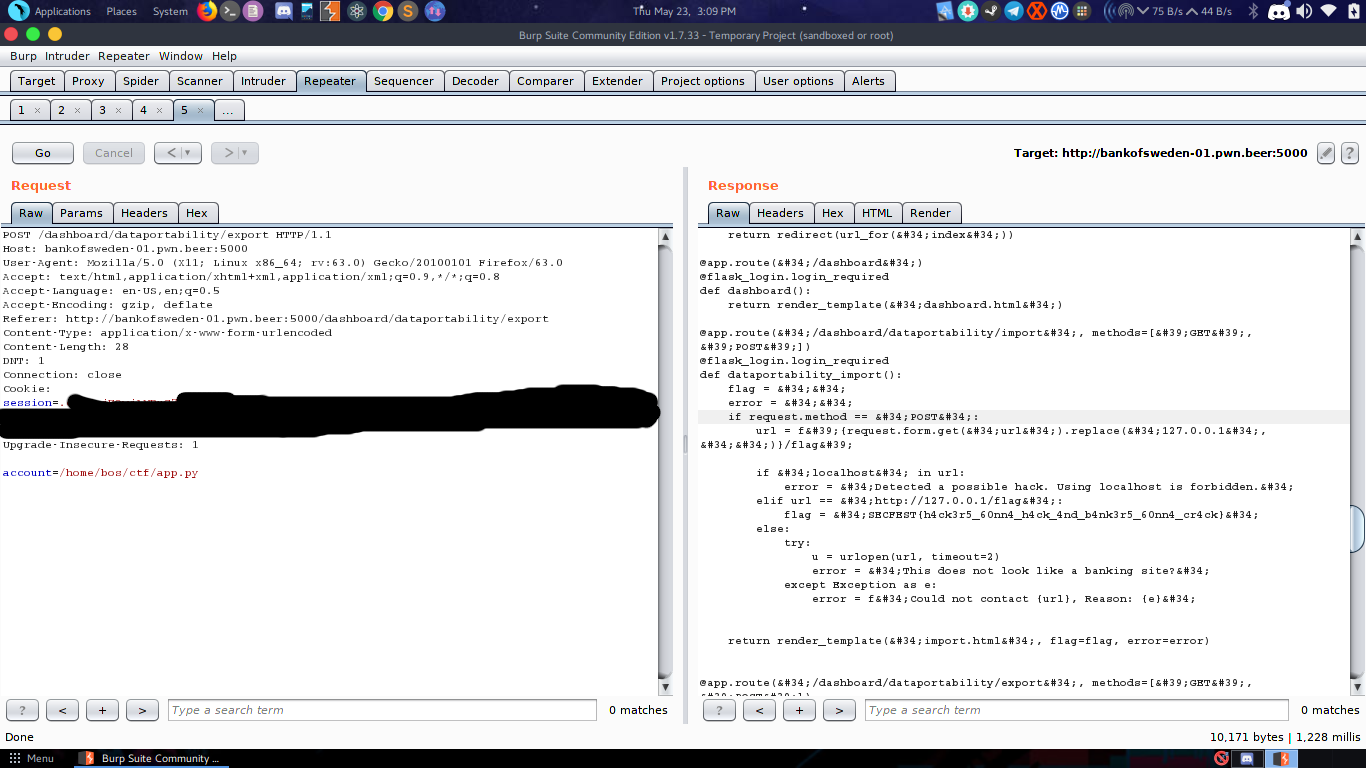 and yeaaa….It worked and the flag was right there.

That was the longest chall I ever solved. Hats off to my team mates: nullpxl mrT4ntr4 for helping me with this chall.

The full script to the crypto part: darkcrypto.py